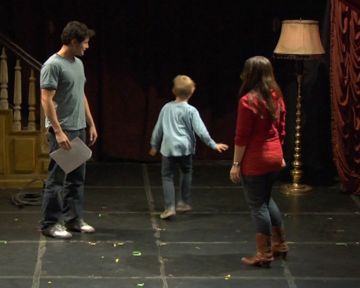 The Kunsthalle Gießen is pleased to present the first institutional solo-exhibition in Germany by the New York based artist Anna Gaskell (*1969 Des Moines/Iowa), curated by Nadia Ismail. The exhibition focuses on photographic and time-based works which have largely characterised the American artists Œuvre since 1996.

Anna Gaskell creates a suggestion within her work of a chronologically related story, that despite its clearly recognisable and representational visual language, nevertheless appears mysterious and eerie. The main protagonists are often pre-adolescent girls, in their early teenage years to the threshold of becoming women, whose actions remain vague and without resolution.

Gaskell triggers the imagination process of the viewer with her haunting pieces, forcing them to fill in the gaps in the narrative and to transform it into a complete story, even beyond its own framework. The interpretation of what happens in the images changes with each viewer and their individual media socialization, due to this the actual images are then transformed into mental images.

Thereby, the title Hide and Seek linguistically indicates that a further dimension is concealed behind that that is immediately visible.

In cooperation with blinkvideo the exhibition is expanded into the virtual room where Anna Gaskell’s film Replayground (2009) is presented.

Further information about the exhibition at
kunsthalle-giessen.de

The artist is represented by the Gallery Gisela Capitain www.galeriecapitain.de