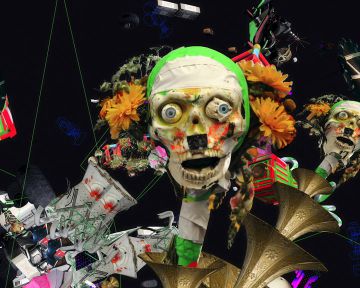 Till Nowak is a digital artist, designer and filmmaker, born in 1980. Since 1999 Till works as a professional computer graphics artist on his own independent projects and as an efficient one-man-production-company for high profile clients. Till graduated 2005 in media design at the University of Applied Sciences in Mainz, Germany. He is now based in Hamburg. Tills work has been exhibited in hundreds of international film festivals, featured in books and at SIGGRAPH 2006, 2007, 2009 and 2011 and was awarded with more than 60 awards, for example in Annecy, Moscow, Aspen and at the AFI Fest Hollywood. Besides his studio work Till has given lectures about his workflows in international events, such as universities in Korea, Germany and Australia, at the 361° conference in Mumbai and the NIFFF in Neuchatel and worked as jury member in various film festivals.

Till Nowak
Till Nowak is a digital artist, designer and filmmaker, born in 1980. Since 1999 Till works as a professional computer graphics artist on his own independent projects and as an efficient one-man-production-company for high profile clients. Till graduated 2005 in media design at the University of Applied Sciences in Mainz, Germany. He is now based in Hamburg. Tills work has been exhibited in hundreds of international film festivals, featured in books and at SIGGRAPH 2006, 2007, 2009 and 2011 and was awarded with more than 60 awards, for example in Annecy, Moscow, Aspen and at the AFI Fest Hollywood. Besides his studio work Till has given lectures about his workflows in international events, such as universities in Korea, Germany and Australia, at the 361° conference in Mumbai and the NIFFF in Neuchatel and worked as jury member in various film festivals.